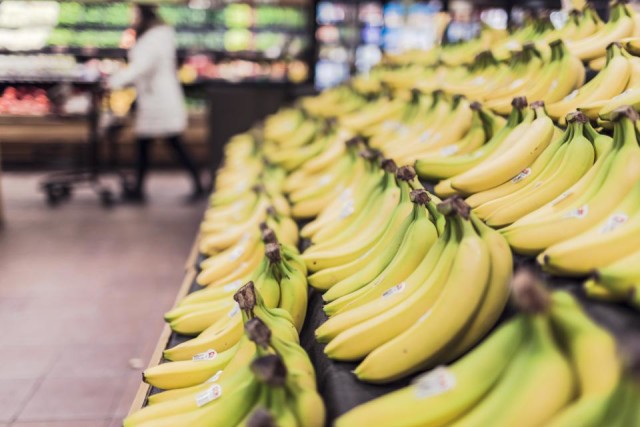 They had only met one day before
In the grocery mart, aisle number four.
She was choosing between spaghetti and linguini
He all set for a bag of capellini.
Unconsciously she had thought out loud
“What’d be best to fit a rowdy crowd?”
He turned to his left and saw her in a daze,
The two bags of pasta just inches from her face.
“Is it a crowd full of kids or adults refined?”
He was surprised that he spoke what was on his mind.
“Children,” she smiled, looking up at the man.
“It’s a kiddie party I have to help plan.”
Their eyes locked together, they each groped for words
Grocery sounds were drowned out, no other voices were heard.
“Spaghetti is best,” he carefully said,
Suddenly feeling light in the head.
She returned the linguini and dropped spaghetti in her cart,
Aware of the sudden light feeling in her heart.
Eyes were still locked together, each couldn’t turn away.
Each wanted this weird, beautiful moment to stay.
She mustered a thank you, then went down the aisle
Leaving him mesmerized, confused by a mile.
“A sweet sauce would go well with it!” he said without thinking.
She turned back to him, her pretty head nodding.
“Do you know where to find it?” she innocently questioned.
“I’ll lead you there,” he smiled at his bold proposition.
They walked down the aisles of the grocery mart,
Sharing recipes, tips and the budgeting smarts.
Kitchen wisdom was shared as all aisles were walked through,
Till they reached the end of aisle twenty two.
She had filled her cart to the top, overflowing,
And she wondered how on earth could she have done such a thing.
He had left his cart back in aisle number eleven
To help push her cart, to be the grocery gentleman.
“I guess this is it,” she reluctantly said.
“Unless you want coffee,” he replied, courage-led.
And so purchases were made, brown bags brought to the car.
Both drove to the coffee shop which wasn’t quite far.
They talked about life, cliches and all,
Work, their interests, even the nearing season of fall.
What was two pm, turned into three pm, four,
Till a “closed” sign was being placed on the door.
He looked into her eyes and back down at his lap,
Amazed at this wonderful feeling kept under wraps.
She felt chemistry working for both of them there,
Knowing neither acknowledged this feeling too hard to bear.
“Thanks for the coffee,” she smiled, as they walked back to their cars.
“It was my pleasure,” he smiled, the words fluttering in his heart.
She drove away, a smile on her face,
He drove back home, still in a daze.
Both drove down the road, quite lost in a trance,
Not quite understanding this twist of romance.
She looked at the road and felt a pang in her heart
Hating to have been the first one to part.
He climbed into bed that night, wounded, heartbroken,
Hoping he had done something for their night to lengthen.
She fixed the cupboards and ref as she got back to her home,
A loneliness in her starting to loom.
No names, she recalled as both stepped out of the shop
Each not wanting to complicate, as problems may crop up.
Shaking her head, she climbed into bed,
Seeing her lover, blankets up to his head.
And he in the next town was next to his wife,
Wishing he had gotten much more out of his life.
“You got all on the list?” she muttered in her deep sleep.
“No; something came up,” he answered under the sheets.
“I have to go back in the morning,” he whispered.
His wife answered him with a snore and a wimper.
“Did you get the wine?” The lover mumbled in bed.
She closed her eyes. “I forgot!” she said.
“Go get it tomorrow,” he demanded then snored.
“I’ll go in the morning,” she sighed at this lord.
In the morning at aisle number two section B,
Electricity flowed back and forth they could see.
She offered her hand, fingers long and dainty,
He wrapped his strong hand in hers as he smiled at her sweetly.
Piercing sparks flowed through his veins yet he didn’t let go of her hand,
Though her eyes rested slowly on his wedding band.
They walked through the aisles, hand in hand but in silence,
Each not needing to speak, through their eyes they could listen.
Once they reached the end of aisle twenty-two,
She let go of his hand and took a look at him too.
“Another lifetime,” she whispered, a weight in her heart.
He nodded, knowing it would be best to part.
They drove back to their towns in a hazy daze,
Each not forgetting the sadness on each other’s face.
But this is all they can get out of that chance,
What will forever remain a transient grocery romance.

Written in September 2004. I love writing about unrequited love or romances that could have been, should have been, could be and should be. Missed connections, like this transient grocery romance, are quite plentiful if I judge it based on what I’ve read, been told and maybe experienced way back when.They make wonderful stories, and quite juicy ones too! Read more original prose and poetry here.