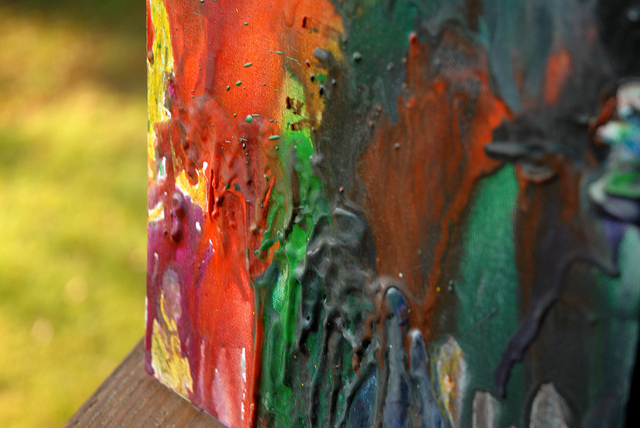 5.
Crayons melted over candles. Blue drops on white paper, marbled with yellows and greens. He spins the paper around while she drizzles the melted colors. Their teacher gives them gold stars and makes them an example of good teamwork. The boys tease him, the girls giggle, the two feel embarrassed and decide to hate each other. Cooties are contagious after all.

10.
She had chased the ball too much and there she sits at the clinic with a badly scraped knee and bruised ego. She really thought she’d save the game. He comes in with a wave and hands her a Hello Kitty band-aid because regular beige ones plain suck. She walks around later that day feeling more healed than when her Mom kissed her boo-boos.

15.
He fiddles around with the string of his backpack. She has her back to him, reaching for her make-up kit deep in her locker. She is chattering on and on about how she almost got caught passing notes in History but got saved by the new guy’s eager questions about Asian Civilization. He cuts her off by asking her to the spring formal. She turns to him, bewildered, and says something about the Asian Civ questioning guy.

20.
She decides to take a break from writing (or attempting to write) her English paper and checks her e-mail. There is one with the subject “Hey there” from a sender whose name is very familiar. She reads and replies, reads and replies. She finds out he got her address from her Mom, who he said was more than eager to provide him with her contact details. She rolls her eyes and decides to give her Mom a call that moment, but changes her mind when he says he was wondering how she’s doing and if it’s okay for her to meet with him because he’s dropping by her university from his university for a joint project in a few weeks.

25.
While his best man drunkenly holds a champagne glass in the air, his thoughts drift to her. His bride beams beside him as the whole tent claps for them, and then she takes his hand and they’re dancing, her head on his shoulder, his hands on the small of her waist, his mind wandering elsewhere.

30.
It is chilly, he shouts out but she ignores him and ventures out into the backyard without a jacket. She lights a cigarette and centers herself with the relaxation that comes from inhaling, exhaling, and thinking of the boy she tangled with under the sheets one winter morning. Sometimes it is only when it’s cold that she feels she’s alive.

35.
Christmas morning is the same craze fest. The children tear through their presents, ignore all the new clothes and run to their rooms to play with their new toys. His wife gleefully talks about the lunch they would be hosting in a few hours. He looks at her and gets that warm feeling in his belly. He gives her a kiss on the nose and she giggles. He is glad there is no Asian Civ guy to ever come between them.

40.
Her divorce papers are finalized. She throws a party to celebrate. In the middle of her tenth (twelfth?) glass of champagne, someone mentions his name and she nearly lets the glass fall from her fingers. She is free, she is curious, and she manages to get more information from her drunken source. This is no rebound, she decides. It was always him. Her hangover erases all the details she thought she’d keep.

45.
After the last box is unpacked, he smiles sadly at his son who rolls his eyes and tells him he’ll be fine. His wife is better at this than he is, and so he stays back by the car and lets his gaze fall on the brick building before him. On the way back home, he doesn’t tell his wife that the sad smile was a nostalgic one, one that remembered a certain winter morning on the third floor of that brick building.

50.
Crayons melted over candles. Blue drops on white paper, marbled with yellows and greens. She spins the paper around with her left hand while she drizzles the melted colors with her right. She holds back against sharing it but changes her mind when it reminds her too much of a teamwork first recognized. She puts it on e-Bay and wakes up the next morning to an unexpectedly good winning bid. She packs the artwork, ships it off and moves on.

55.
Crayons melted over candles. She keeps telling him it is something their grandson can do better, but he just nods and smiles and she knows it is one of his artsy quirks. He sits back and smiles, a wistful one, a parting one. Then he stands, walks forward, and sticks two gold stars carefully on the upper right corner of the painting. He smiles at the artwork, rolls it up and moves on.