DINOSAURS Island in Clark, Pampanga has been on our radar for the longest time, so when we got the chance to drop by last weekend, we were psyched. We were at Clark last weekend for the 19th Hot Air Balloon Fest. My husband asked me to check out Dinosaurs Island on Waze, and boy, was I surprised that we were 5 minutes away from the amusement park. We had a GREAT time! Here are some pictures (and videos!) from our visit to Dinosaurs Island.

Upon entering the Clark Picnic Grounds, you’ll see a huge sign that says CLARK LAND. You’re in the right spot, no worries! A friendly guard guided us to the parking lot, which is super near the entrance. Upon entering the Clark Land gate, you will be welcomed by food and souvenir booths stores. Go straight and you’ll come across this huge sign! 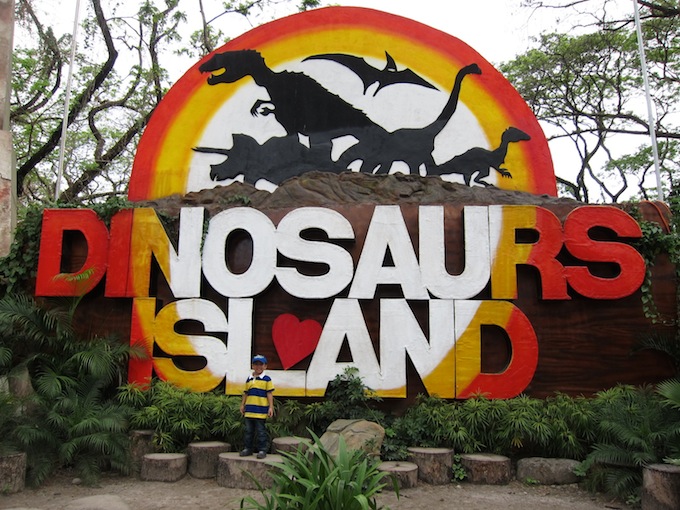 Dinosaurs Island is the Philippines’ 1st Animatronics Dinosaur Park. Ticket booths are on the right side of this awesome sign that is so Jurassic Park. We got tickets at P350 each (adults) and P300 (kids). Once you’re ready, you’ll fall in line in front of the gigantic gates. We liked that the crowd was controlled — not everyone can go in right away. This makes for a more personal, self-guided walking tour. You’re on your own when you enter Dinosaurs Island! 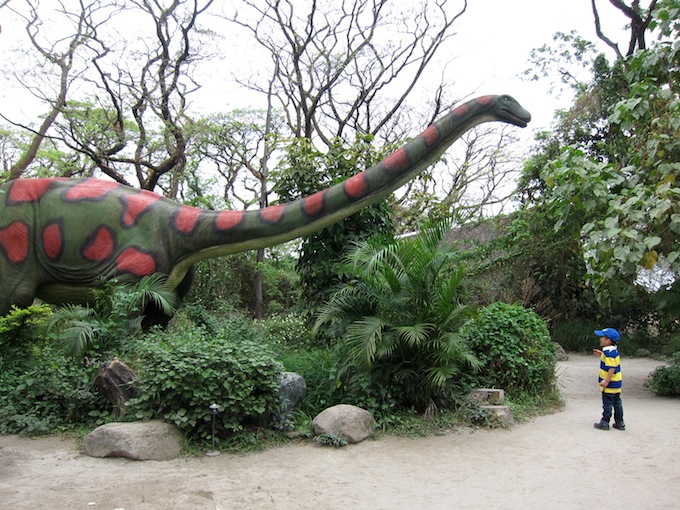 Timmy meets his first dinosaur. “It’s a long neck!,” he says. He stared up at the dinosaur in awe. He knew they they were “real” but wasn’t scared. If only I could paint all the awesomeness that was on his face. Priceless.

“I can hear elephants!,” my 5-year-old declared. “Those are all dinosaurs, Timmy,” I reminded, stifling a giggle. “Let’s go see more dinosaurs!,” he said, then led the way into the woods. 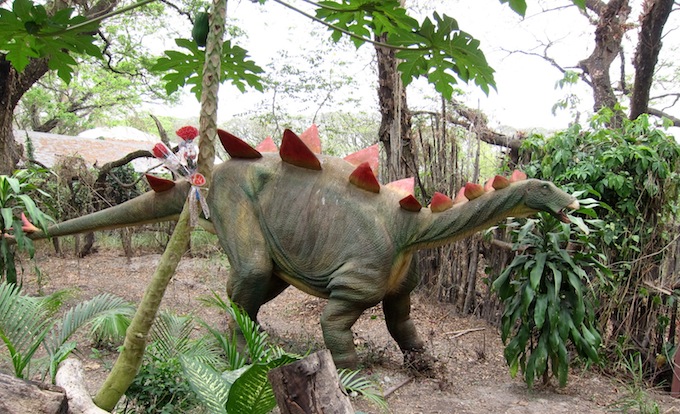 There are different kinds of dinosaurs in every twist and turn of the Island grounds. Plaques hold information about each dinosaur — scientific name, common name, size, etc. You can follow the forest trail and learn more about each dinosaur. There are over 30 species! 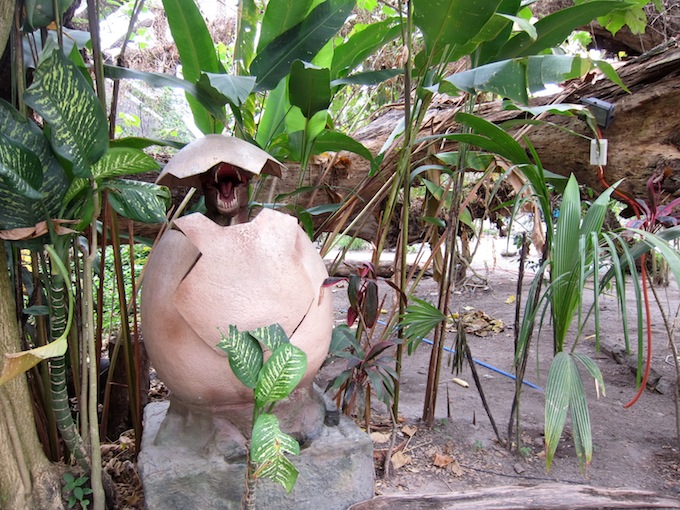 This baby dinosaur moved his head up and down, and it freaked us out a little bit. We had seen a video of this baby-in-the-egg on Youtube, and it intrigued Timmy. Up close though, it wasn’t so cute. Heehee. 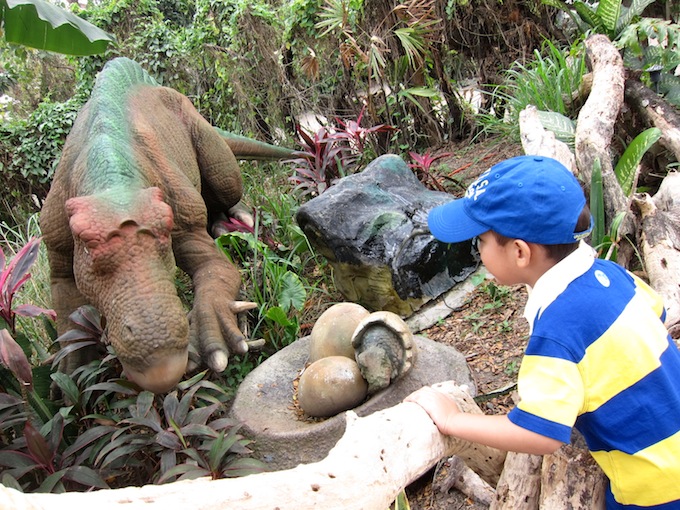 “It’s a Mommy dinosaur!,” I shared with Timmy, as we came across this “Good Mother Lizard” (that’s what the plaque said!). This was about the third dinosaur we had met, and Timmy was becoming braver and braver. Even though they were growling and moving, he was moving closer and closer to each one. Here he is checking Mommy Dinosaur and her babies out.

Aside from the open grounds, there is also a museum that holds mounted dinosaur fossils. There are also real life-sized skeletons and information to help you learn more about the dinosaurs’ extinction.

Timmy had a blast posing by the T-Rex and triceratops fossils, but this display caught his attention longest. He was staring at the dinosaur skull in awe and I could hear him talking to himself. “It’s the head of the dinosaur. It’s angry,” he said. He giggled, then he moved on to the next display. 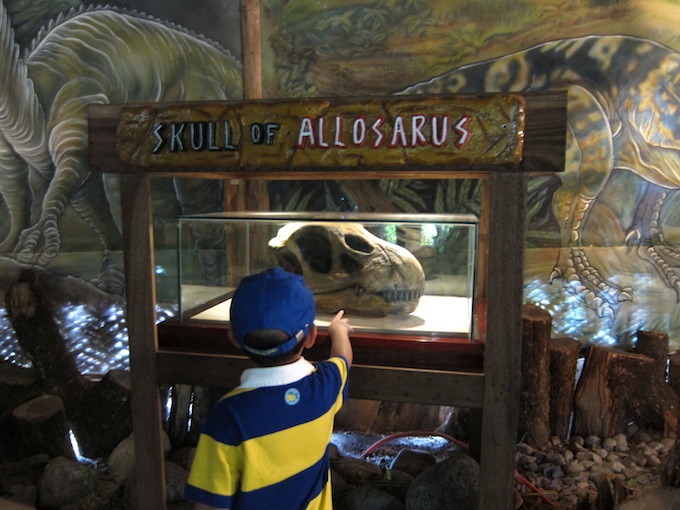 You don’t have guides with you when you enter Dinosaurs Island. You’ll come across signs like this almost everywhere, so no need to feel afraid! You won’t get lost on the forest trail. 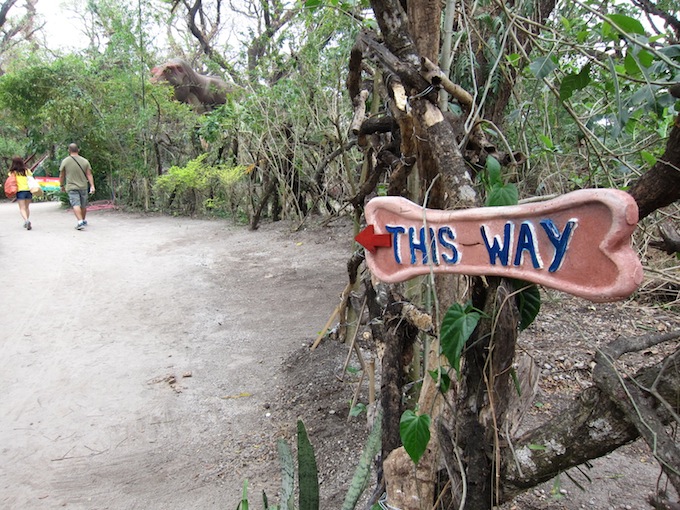 What’d I tell ya? Braver and braver, right? Timmy just took his baseball cap off and offered it to the Mommy Triceratops. “Eat my hat!,” he said. What a generous boy. Mommy Triceratops just continued moving her head and growling. Maybe she was full. 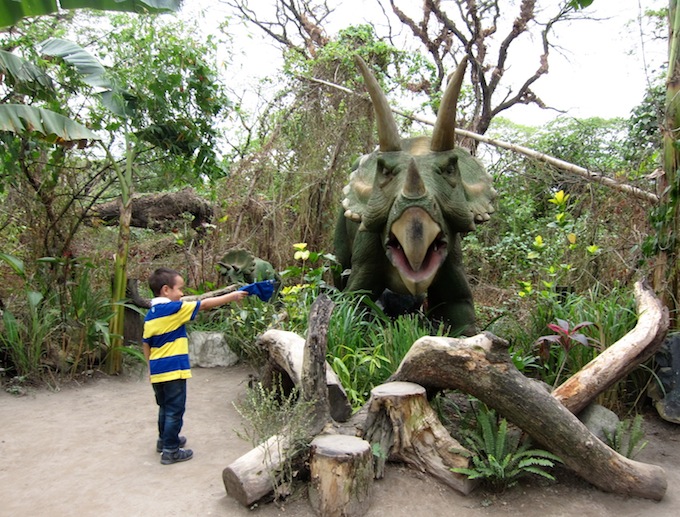 Braver and braver this little boy was becoming. Before he’d pose for a picture, he’d see how close he could get to each dinosaur. He offered his hand this time. Thank goodness this dinosaur was also full. He just growled and kept moving, oblivious to the little boy’s offer. 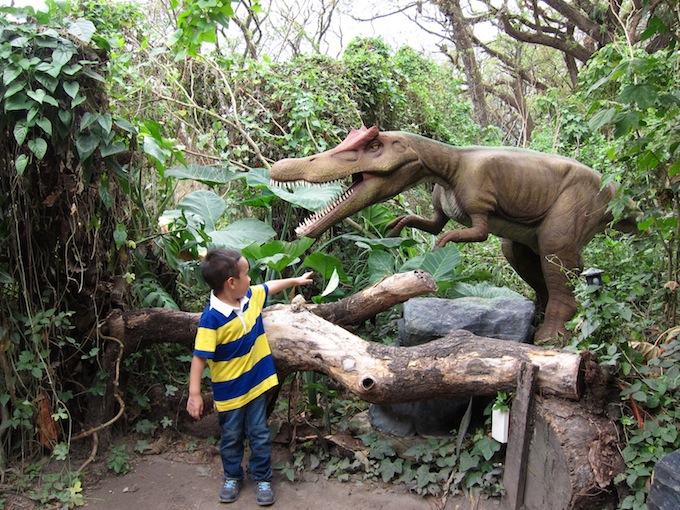 Then we were able to get up close and personal with the most feared of all dinosaurs — the T-Rex. How brave are you? We’ll find out! Timmy was brave as he took on the challenge to feed the T-Rex! 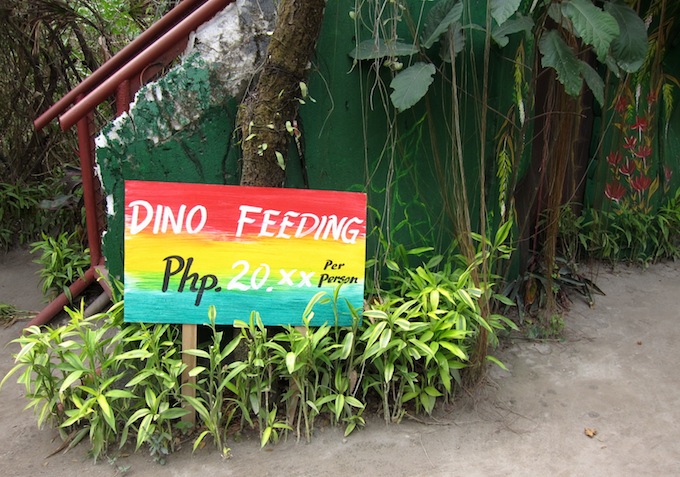 My husband and Timmy went up the steep stairs to be at head level with the T-Rex. Once by the balcony, Timmy was able to give the T-Rex his much sought for lunch. 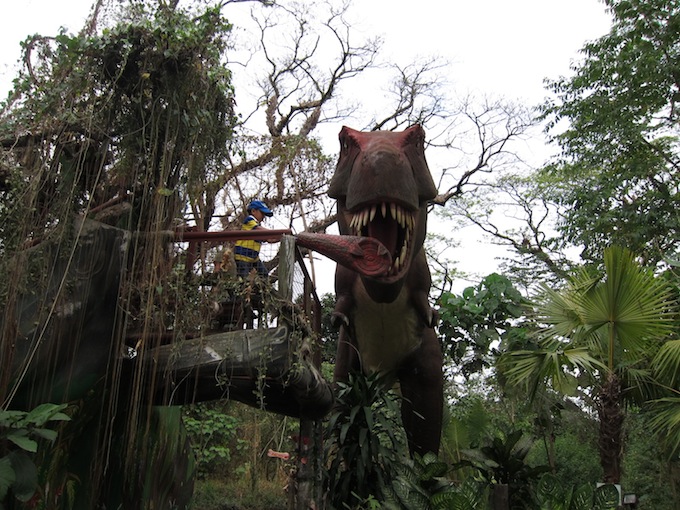 We have a short video of this moment! Check it out below. Turn the volume on so you can hear the hungry T-Rex’s growls.

Later on, he became the T-Rex’s lunch. Growl! 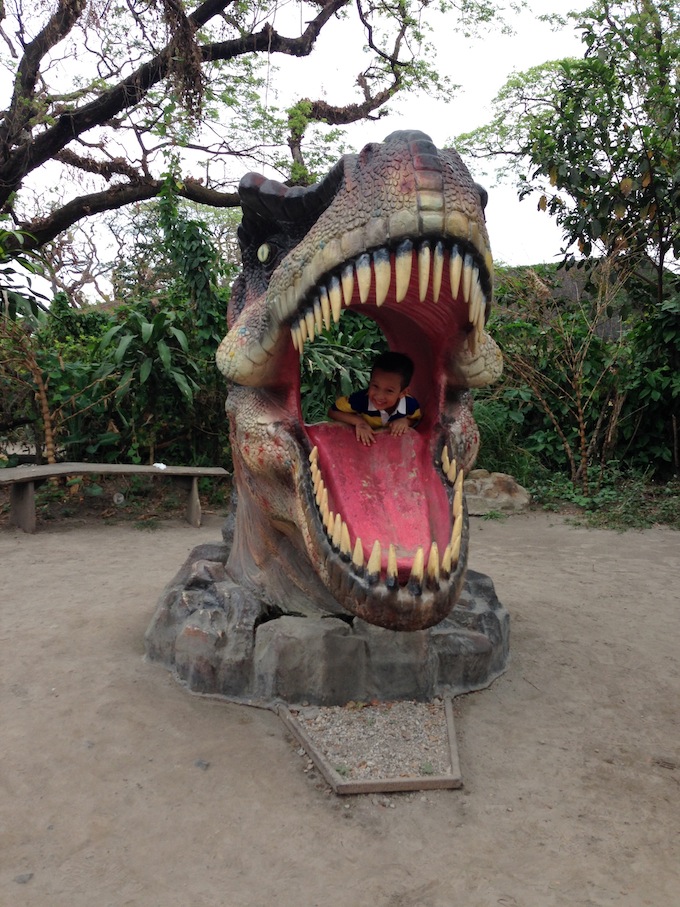 Dinosaurs Island is great for families with young kids. The grounds are well-kept. They’re clean and well-maintained, and the staff is courteous. There are a LOT more dinosaurs, but I won’t post pictures of them all! That way you’ll be surprised at what other dinosaurs you can discover at every twist of the road. 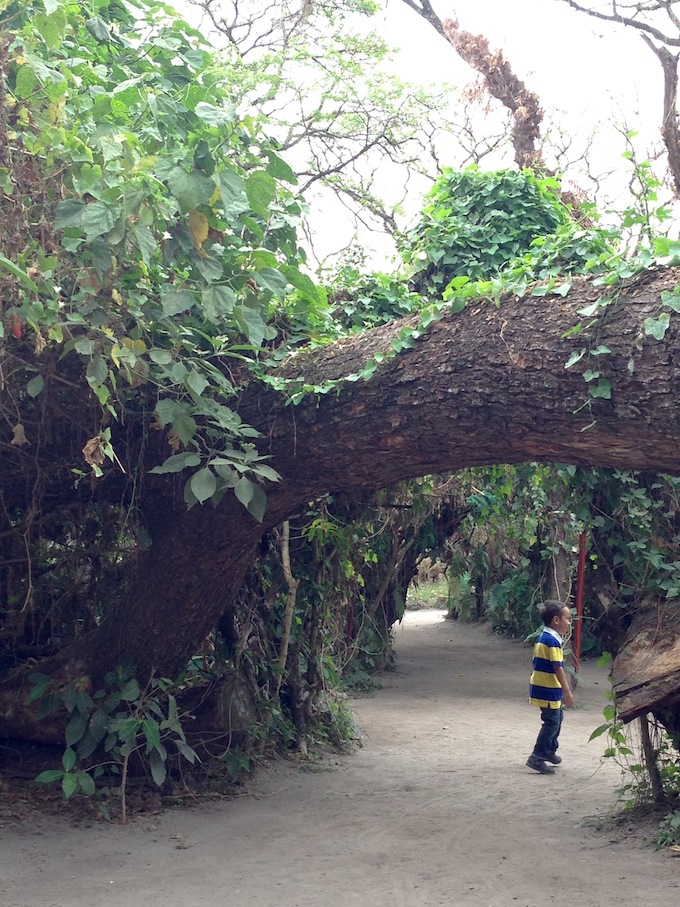 As if your tour of the grounds wasn’t entertainment enough, you’ll encounter Dancing Dinosaurs too! We only caught one during our visit, and here he is. I bet Jurassic Park did NOT have talented dinos like this.

But wait, there’s more! Are you ready to go on a Jurassic Jungle Safari? For only P100 per person, you can ride a small tram and enter another part of the grounds. 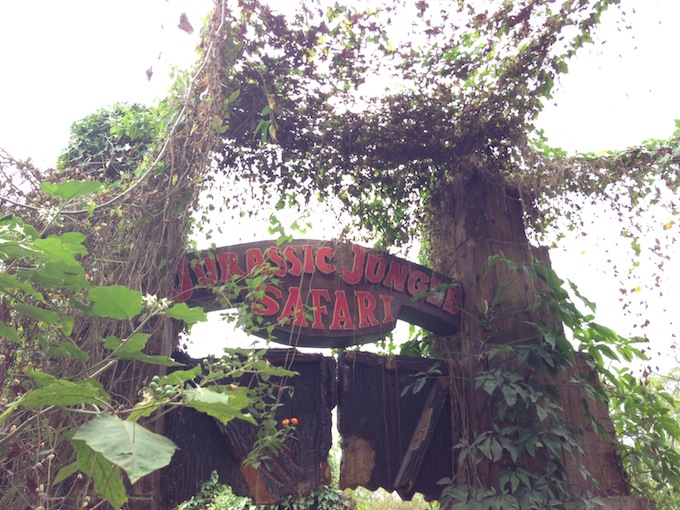 We don’t have pictures of this part of our visit, but I have something better for you — videos! I was laughing too hard the whole time and also, okay, screaming. Good thing my sister Patti was able to take videos. Please ignore my and my sister’s screams. Haha! It was all good fun!

By the end of the ride, Timmy was a little shaken. Mostly because of our screams. Haha! Sorry, Timmy. My sister and I thought the ride was fun AND hilarious.

There are other parts of the park you can enjoy like the 7D Ride and Dinosaur Token rides for kids. How do you get to Dinosaurs Island? Here’s a map to the park.

You can learn more about Dinosaurs Island on the Clark Freeport Marketing site.

We had so much fun at Dinosaurs Island! We’ll definitely come back here with more family members in tow. It would be a cool place to enjoy with Timmy’s cousins.

If you’ve got a family with young kids or if you’re young-at-heart yourself, visit Dinosaurs Island at Clark, Pampanga. It’s a lot of fun!